It is only 5 days but it feels like weeks since we left Moldavia for Transylvania. The days were incredibly long allowing for so many different things to happen – ever new, exciting and unexpected occurrences – mostly thanks to incredible people we met on the way and a lot of spontaneity. Those days we learned so much about Romania, the people here welcomed us so nicely and we are a lot (street-) smarter due to many survival tips and first-person history lessons.

From Alex in Bicaz we got to know that we need a fire as bear-protection. In case of being chased by one we have to run diagonally down the hills (bears can only run straight down a hill or horizontally,  so they will be confused).
In the case that I am not able to confuse the bears, I would like to be buried at the graveyard of Sighisoara. It is a magical place, like a secret garden. Wild and peaceful at the same time and different from every graveyard I have seen so far. As you can see in the picture, people buy their grave stones already before they die. And since there are many bears around I made a reservation on my name as well. 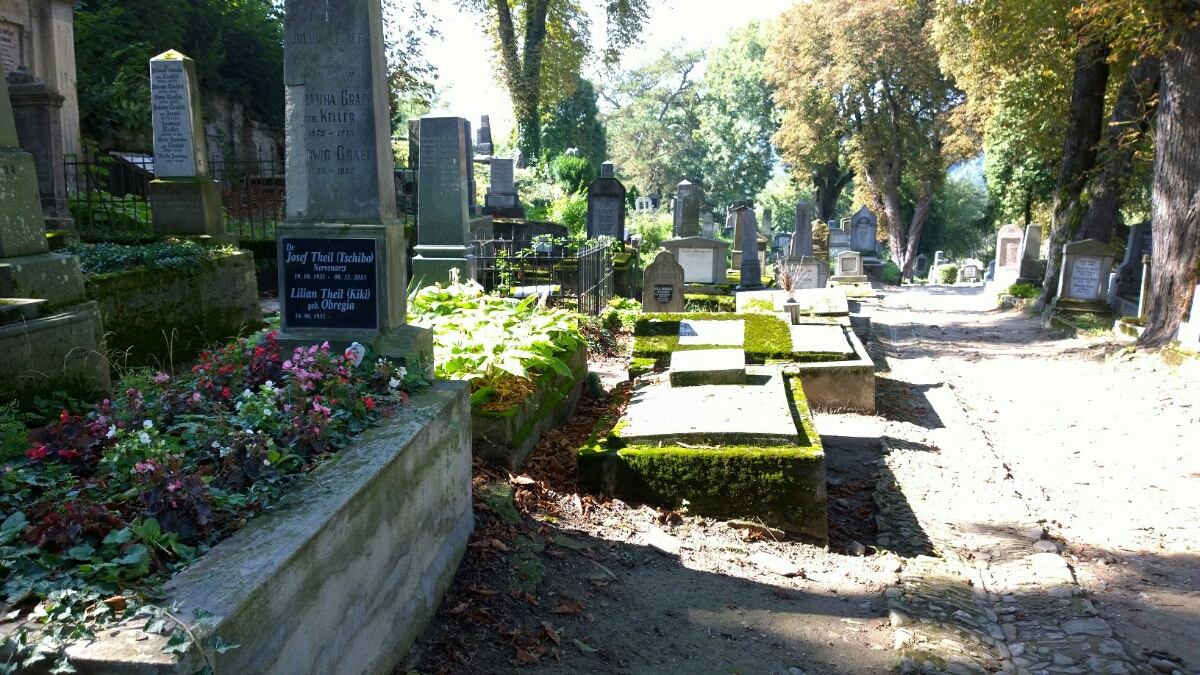 I will continue with the topic of dying. In Agnita we met a nice Romanian who just lost his wife. He as well spoke perfectly German since he worked at sport Conrad in Germany and besides inviting us over he told us that in Romania, the Romanian culture expects you to go to the grave stone of your partner every day for 6 weeks. After that you should stay without a new partner for at least a year. I don’t know what he is doing with his job in that time but I hope that German companies understand this.

Ok, before dying (of a bear attack, or the way up on the Transfagarasan) we wanted to party. And so, right behind sighisoara, we stopped at a village fest packed with people, a stage, with musicians and foods & drinks. We met Bianca who sold beer and her incredible home made visinata (liquor made of cherries). Bianca turned out to be our hero or angle for the night. She organized a place for us to stay (inside, on a real bed!), so that we could enjoy the party much longer. At the next day she gave us Romanian bread, self made marmalade and zakuska (spread made of vegetables) and visinata for the trip and even invited us for a coffee. We didn’t know what to say, in the end we just accepted it and enjoyed her incredible hospitality.

The village fest was full of exceptional experiences. The music was very traditional, people were dancing and it was nice to see Romanian, Roma and Siebenbuerger Sachsen celebrating at one place together. In all the other countries so far the cultures seemed rather separated. Especially the Roma women wore beautiful dressed and I was jealous for the long and wild dark hair. Generally I had the feeling that women were not drinking alcohol but Bianca told me it is common also for women and that way convinced me easily to try her amazing vvisinata.
Thereby we learned that “norog” is the Romanian “cheers” and later we were warned better not use the German “prost” cause that actually means “stupid”. Lukas was tested on a arm-wrestling battle and I had the unique experience of being “frotted upon” by several 10 year olds (at the same time) – boldly looking Lukas in the eyes while doing it. I was speechless before able to fight back but at least got some insights into the Romanian culture of male machismo. After I got one of the boys k.o. in arm wrestling, I was knocked out by a 15 years old and decided that my arm muscles need to increase. 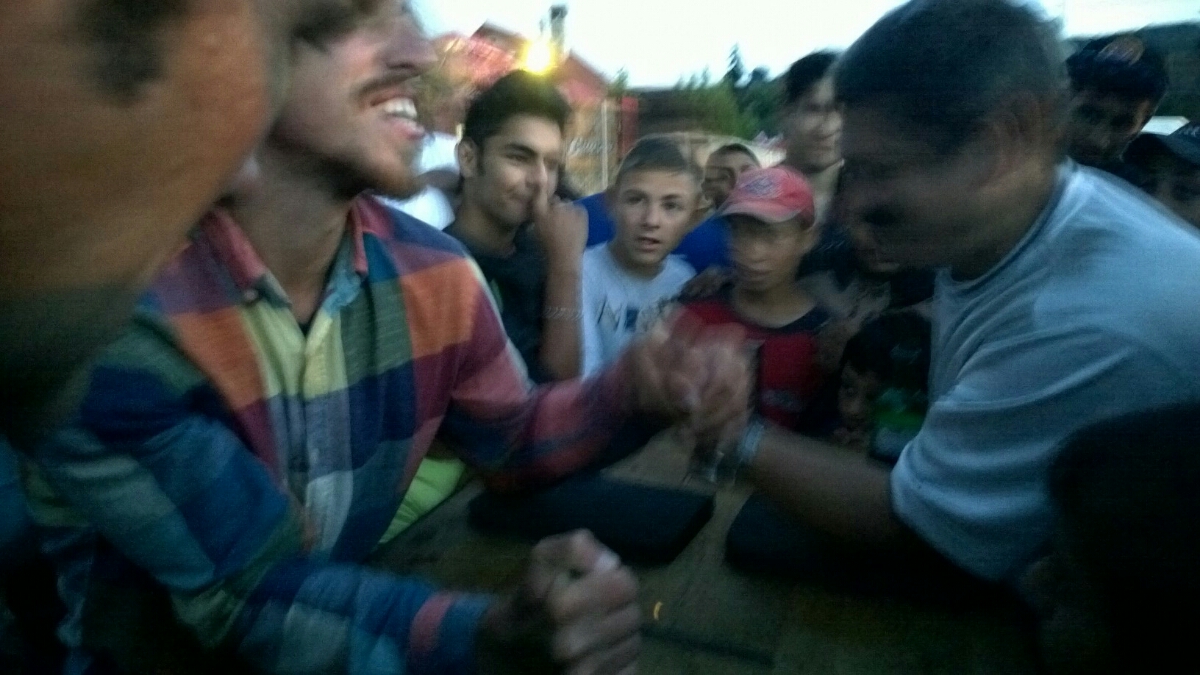 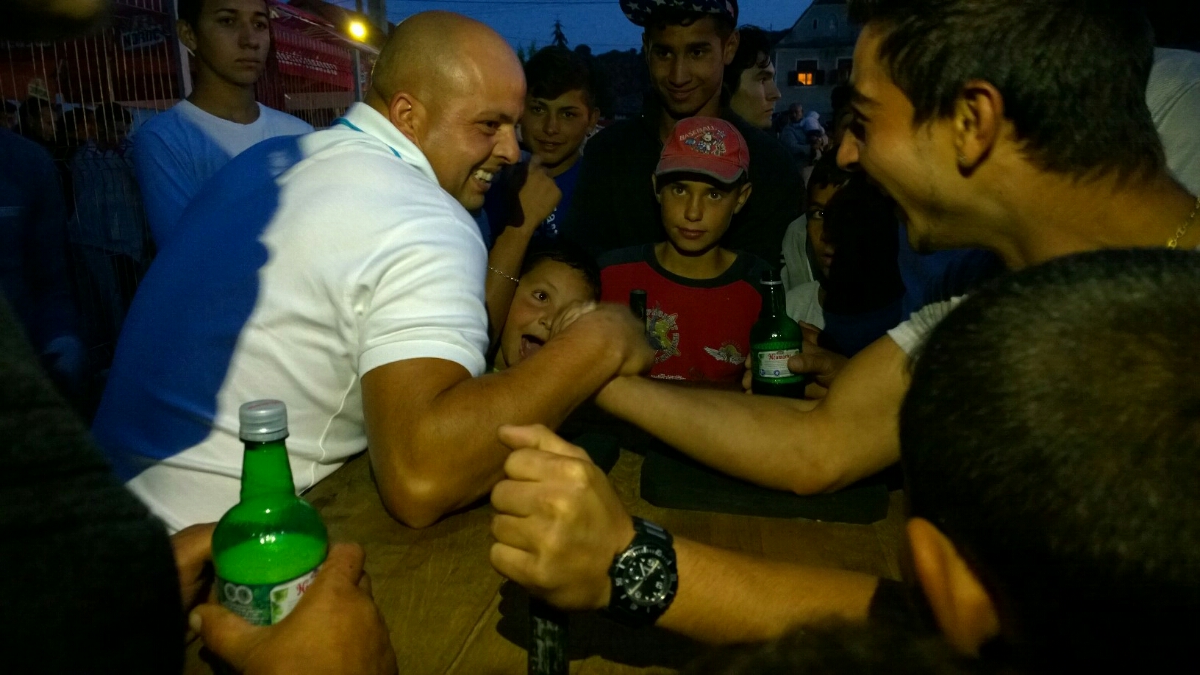 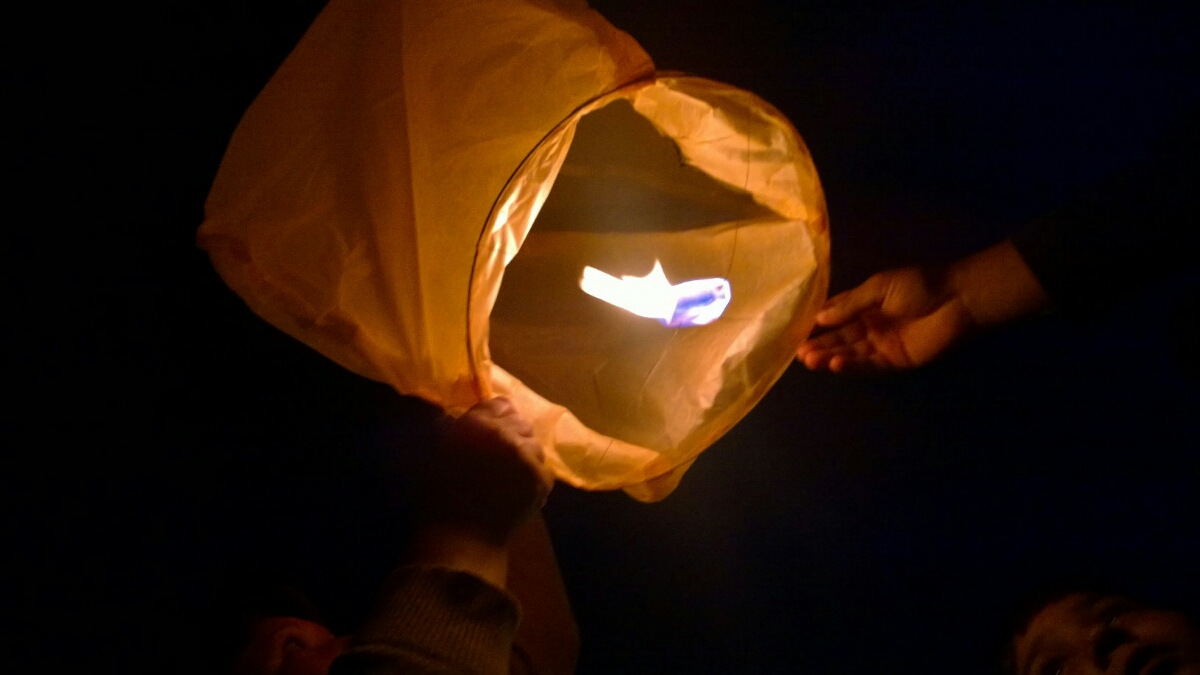 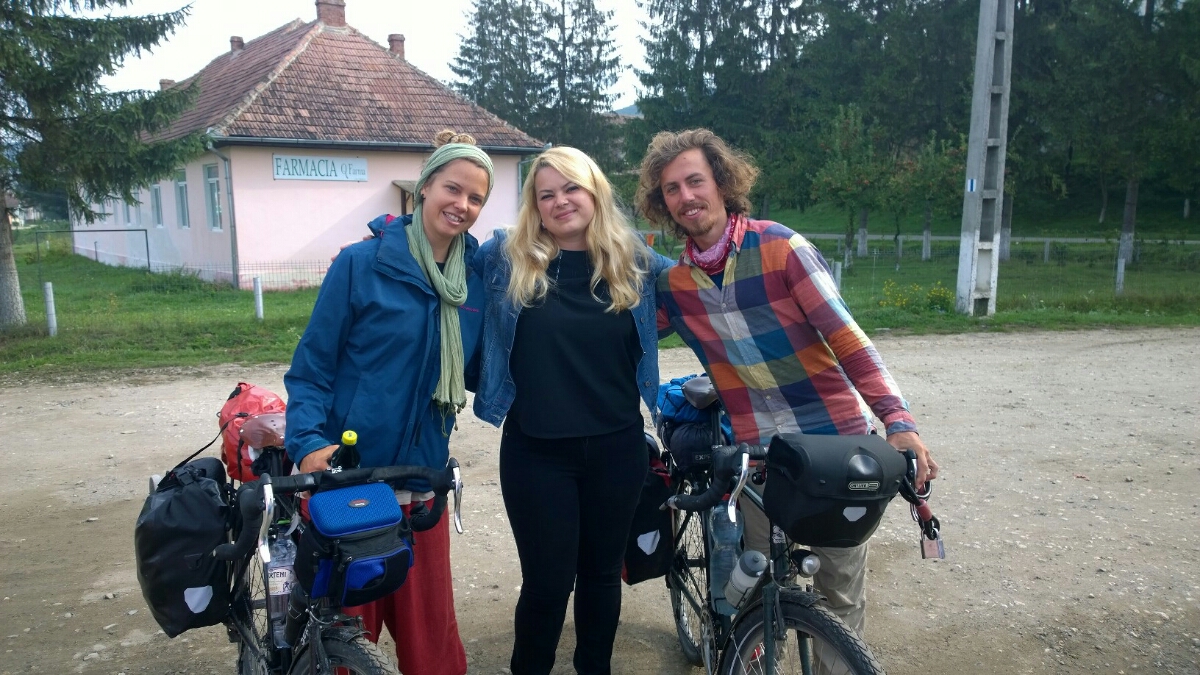 The party went on the next day when we reached “Kirchberg” the German name for Chirpăr, a small village.  Lukas just wanted to quickly refill the water bottles when Peter an old sachse living in Germany took over. We had no chance to leave again, partly due to the friendliness of Peter and his wife Elsa, partly because of the palinka and also because of the interesting stories about Rumania under communism and the time of the revolution. Peter and Elsa shared their first hand experiences with us and enjoyed being able to talk in German with us. Ultimately we ended up in a local bar, where the youth danced traditional  Rumanian dances, played billard or spent their money on gambling machines. Also here we got useful tips for life, e.g. The techniques to stop your partner from snoring, which we rather not want to repeat here. I think overall it was as local as it can get. again we were stocked by the way we have been welcomed and begifted when we left again.

After these two nights of celebration we felt best prepared for the 1600 altitude meters of the Transfagarasan. 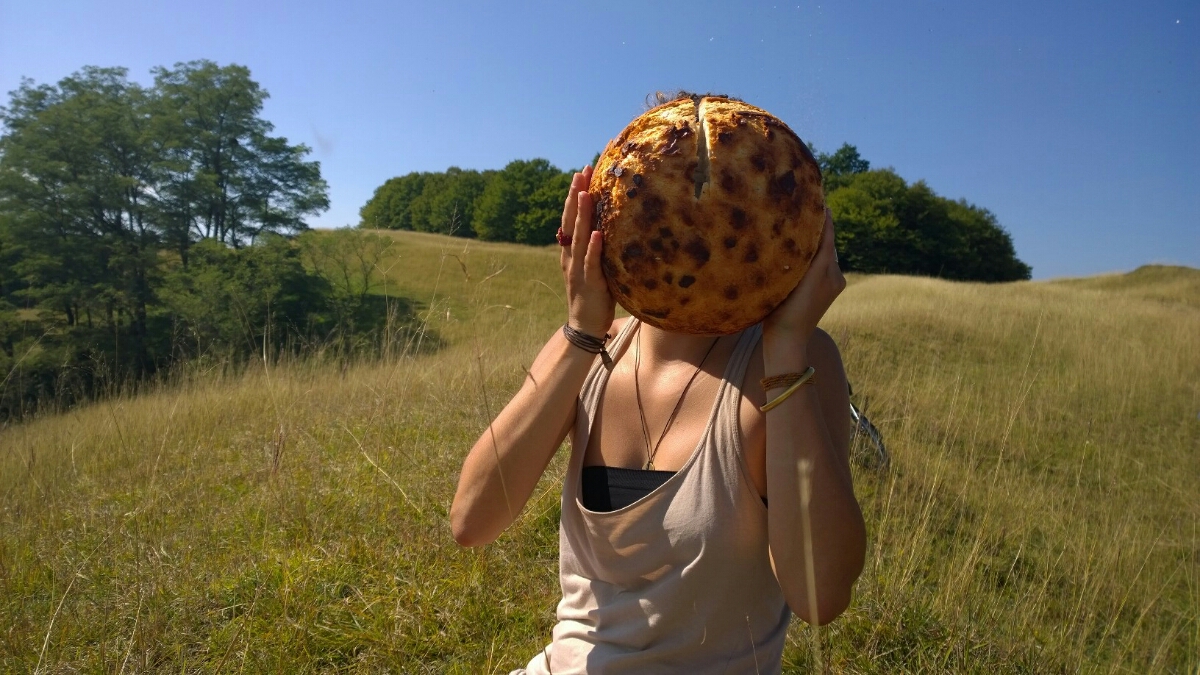 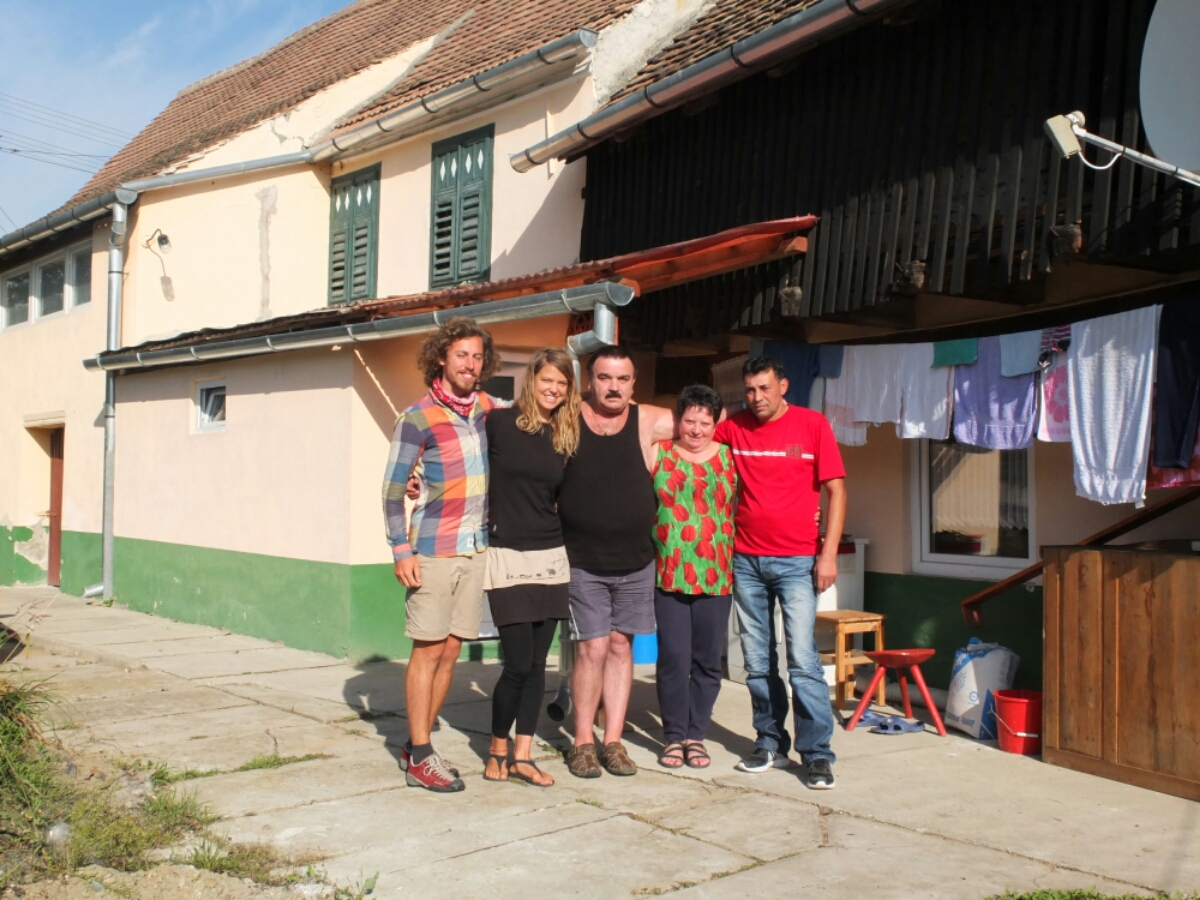